The MARS Stewardship Crew is hard at work engaging in Oregon white oak restoration projects in Klickitat County.  In collaboration with the WA Department of Natural Resources, the Stewardship Crew has been conducting oak release thinnings on the Trout Lake Natural Area Preserve and the White Salmon Oaks Natural Area Preserve.  These projects are crucial to protecting and maintaining Oregon white oak due to continued losses and degradation of oak habitat over past decades.

Oregon white oak is the only native oak in Washington. It is a fire adapted species that is shade intolerant.  These oak habitats require frequent, low-to-moderate severity fires and full sun to thrive.  Fire is part of the historic disturbance regime that sustains Oregon white oak ecosystems and fire exclusion is a major factor in declines of oak habitat.  Without frequent fires, conifer species such as Douglas-fir (Pseudotsuga menziesii) encroach upon oak habitat, eventually overtopping the oaks, causing them to die off and changing the forest structure from an open oak savannah, meadow, or bald into a dense, closed-canopy, conifer stand. 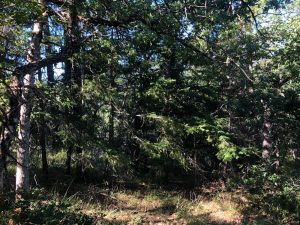 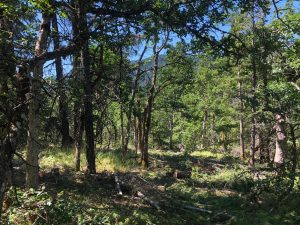 Oregon white oak ecosystems are important habitat for a wide variety of wildlife including deer, elk, Western gray squirrels, wild turkey, and many other species.  According to the Fire Effects Information System (FEIS), studies have shown species richness for birds “was greater in Oregon white oak woodlands than in any age class of Douglas-fir forests in the Cascade Range of south-central Washington”.

Although there is nothing wrong with conifer stands, restoration thinning is warranted when they encroach upon these oak ecosystems in places where landowners and/or managers are prioritizing wildlife habitat.  These treatments involve cutting the conifers away from the oak, leaving a stand that is composed primarily of Oregon white oak.  Projects such as these have been shown to significantly increase oak growth and acorn production.  One study in Washington found that oak diameter growth was 194% greater in stands where Douglas-fir was removed over stands in which the fir was not removed (Devine & Harrington, 2006).

Due to fire exclusion practices and the subsequent conifer encroachment, stand conditions have altered to the point that solely using prescribed fire as a restoration tool is problematic.  Fuel loads and conditions have changed so that any fire introduced has a higher risk of burning too severely and may cause more damage to the oak trees.  Mechanical removal of the conifers helps return the stand to conditions where prescribed fire may be used safely and effectively once more.  And yes, the MARS Stewardship Crew is trained and ready to put good fire on the ground as well!